Her people assumed the war between the Cumulus and Basalt had begun to tap their resources too greatly, which started destroying the planet ecosystems. The land shaking had increasingly become more frequent in recent years, and each time it physically changed their surroundings. The ocean floor they had known their whole life was displaced and unrecognizable. Before the shaking began, there had only been sea and sky. No one ever dreamed the ocean land would start rising up through the water.

The Cumulus people had always hovered and flown about the skies. The Cumulus were very different from the Basalt in almost every way. Unlike the Basalt, Cumulus didn’t have legs, instead their form simply streamed into a mist. They were similar in visual appearance in that they had some common features including eyes, ears, mouth, hair, two arms, and basic human form. But the Cumulus had no gills and they were not restricted by physical interaction or limitations. They were wispy and spirit-like. The entire energy-formed race featured twisting white air that created ever-changing intricate designs and swirls in place of physical skin. It would be hard to assign them a color because they were a partially transparent white.

“Sometimes it barely seems like we’re fixing anything at all” Ellara confided softly. “If it weren’t for the Cumulus’ extreme sound sensitivity, we would have no defense at all against their advances.”

Kadden shot her a solemn stare. “I just hope we can find help. I hope we can deal with Ludan before he ‘deals’ with us.”

All it took was one selfish Cumulus, Ludan, to turn against the Basalt, thus tipping the balance and bringing turmoil to the peaceful planet of Terryl. Thankfully, not all Basalt and Cumulus were at war. A faction of the Cumulus were faking loyalty to Ludan, but secretly siding with the Basalt.

Though Ellara could not relate to Ludan’s pure blood thirst, she understood aspects of the Cumulus reasoning for war. After lifetimes of serving other species, the Cumulus had never been thanked or appreciated. Though her people considered themselves wise and kind, she herself had not always received that sort of treatment. Growing up, she had been teased and made fun of at times. She made efforts to stay positive about life, yet she had seen so much destruction in her time. What was the purpose in living, when mortals just end up dying? She could almost comprehend how the immortal Cumulus beings saw fit to wipe the often unkind and selfish mortals from existence. 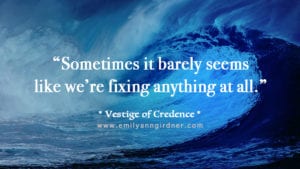 Looking for the Obsidian Series by Emilyann Girdner? Click Here

More Ways to Connect with Emilyann:

Vestige of Credence (Epic Fantasy Story): Chapter 4 Part 28: The Ice Caps By first instinct they planned to shoot him down, but they noticed he carried a small rock with the words “Message for Niomi” inscribed on it. That little rock saved his life. Ellara could not help but feel a little prideful, because the rock […]

Love Fantasy Books? Vestige of Credence 27 – Wings of the Dragile

Vestige of Credence: Chapter 4 Part 27: Wings of the Dragile Everyone was staring at Niomi with inquisitive eyes. “I know you need help,” Niomi started, “I saw the note you sent. I just, I…” she looked to the ground sadly, “I cannot get us there. The Cumulus used their teleportation technology to take visitors to their […]

Epic Fantasy Book: Vestige of Credence 26 – Help on the Journey

Vestige of Credence (Epic Fantasy Book): Chapter 4 Part 26: Help on the Journey   “Unfortunately,” Ellara began, “we really can’t help you find your way back to the Basalt people. Although Lailie and Anvid are able to guide us through the underground, it is impossible to know right now where we stand in relation to the […]