Sometimes the overlooked details of our favorite epic stories are the most entertaining moments. Such is the case concerning how it was that Voldemort came to reunite with his long lost snake, Nagini. 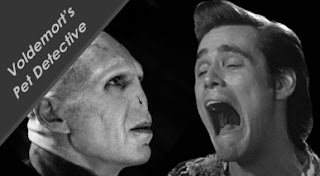 Like anyone else missing a beloved pet, Voldemort sought the help of a pet detective. He first appeared to Ace (the pet detective) as a diary, only to be ripped apart and utilized as cat litter. He also latched himself to a locket that found its way into Ace’s hands briefly. But to Voldemort’s dismay Ace quickly offered away the locket to a lady friend. So  his strange appearnce and magical abilities came as a bit of a shock to Ace when Voldemort revealed himself one dark night in a pub bathroom.
“This night I demand you help me find what I have lost, Ace Ven-tura” he hissed.
“And would that be your nose?”Ace replied.
His eyes sharp with anger Voldemort responded “Ace Ventura, you will fetch me my snake, Nagini, or I will see to it that you break apart into ashes.” 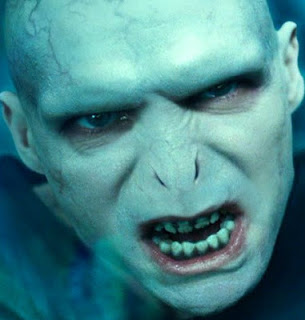 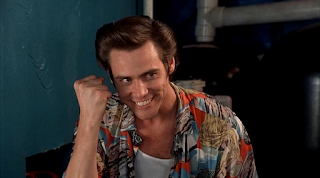 Voldemort struck the bathroom door with his power causing it to burst into a million pieces.”Really” Voldemort hissed. 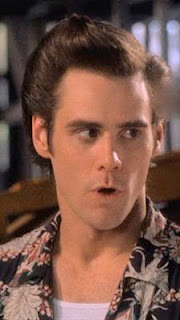 “Alrighty then” Ace conceded.
Sensing the evil of Voldemort’s intentions, Ace sought out Nagini, but with the intentions of destroying him.
Unfortunately, Nagini’s pleading big eyes touched Ace’s heart. And so it was that Ace succeeded in uniting Nagini and Voldemort before he briefly joined the death eaters (very briefly as he was quickly eliminated for being a muggle).
Twilight Park The Movie Dirty Dozen